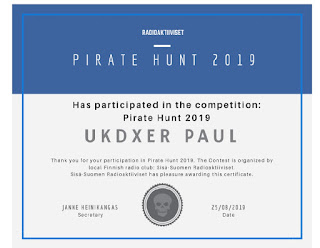 I've received a diploma from the organisers of the Pirate Hunt 2019 for taking part in this year's contest. The event was held at Easter and challenged DXers to log as many pirate stations over a 48 hour period.

Ten competitors from four different countries took part in the competition. The club decided not to publish the results as it was felt listeners who used multiple SDR receivers in different countries would have an unfair advantage from those listening on their home receivers. The names are in random order:

They say they won't be holding one next year.  Many thanks to the organisers for arranging the Pirate Hunt 2019.
Posted by uk dxer at 17:17

With or without the use of web tuners?

If some people has a joy of remote sdr dxing and some get the best out of it using tube receiver why we should limit anyone's way of having fun. As long as there are more than one people there are at least two different opinions. The problem is actually how to rank the results - even everyone could already now valutate them based on own principles. It took some time to decide how to present them and thats our decision to not give any numerical details this time. DXing will never be equal. Someone lives in metropol, someone in wild forest, so it is unnecessary to make strict rules which kind of receivers are allowed and where they should locate.

the solution is simple: to establish two separate categories and diplomas: 1) for those who use own non-remote receivers and antennas only, 2) for those who use remote SDRs too/only. But the mixing of this two categories is absolutely incorrect, IMHO, because remote SDR users will always have advantage over DXers with local equipment. And this circumstance will induce all participants of the competition to prefer remote listening emasculating the "DX" meaning of the "Pirate Hunt", IMHO.

That is all well and good but proving which method of listening participants have used is impossible.

Should those using an Icon or JRC receiver with sophisticated antennae be barred for having an advantage over an owner of a Tecsun/sui generis-type radio relying on a telescopic aerial?

That is of course if you really need validation for hearing x amount of free radio stations in a given day...

The problem is every listener will have a different set-up. You might live in a city with a lot of noise pollution or out in the country.

As anon says, a sophisticated communications receiver will pull in more than a portable.

But the Pirate Hunt was set up just for a bit of fun for listeners but now it is all being over-analysed. I think that's why they're not holding it next year.

For each DXer, what they can hear on their receiver is their own personal challenge and whether you hear 10 stations or 100, that's your own achievement.

I think Alex's idea of 2 categories - one for SDR listeners and one for listeners with their own equipment is a good one.