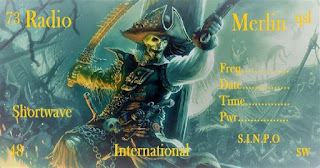 I'm a bit late to this news as I'm on holiday this week but I saw on Facebook that the long-running
shortwave pirate Radio Merlin International was raided today by Ofcom at 11.48am backed up by five police cars.

Ofcom had a warrant to enter operator Paul Watt's premises while it was unoccupied and proceeded to remove equipment from the studio.

The station, which has been running since 1990, has been one of the most regular operators on 48 metres running daily broadcasts on 6305 kHz.

Recently the station was heard widely across North America thanks to a relay via WRMI but it looks like Merlin will be off the air now for the foreseeable future.

The last UK shortwave pirate to be raided was Bogusman, who had been broadcasting on an international emergency frequency. But we don't know what prompted Ofcom to take action again Merlin.

All the best Paul and the team at Merlin.
(Information from Facebook)

Solidarity with Radio Merlin and their team. I truly hope they return with the good music and entertainment. In my personal opinion, OFCOM have a really bizarre and contradictory approach to pirate radio. In my home city, there are scores of people in legal community radio who have pirate radio histories: there are even programmes doing "revival" sessions from key pirate radio DJs. Several stations have the 1989 reggae protest single "Pirates Anthem" by Home T, Cocoa T and Shabba Ranks, on rotation!! OFCOM seem not to mind any of this. In London and the Midlands, some legal community stations openly promote dance nights put on by pirate radio crews, and again, no one seems to mind. Then OFCOM do something like this to a small SW station. It seems odd. Anyway, enough of my thoughts. Let's all wish the Merlin team well and hope that they can come back in some capacity.