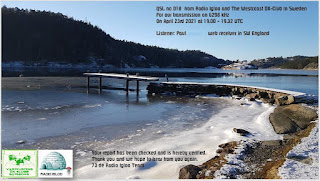 As usual, the most stations came from The Netherlands, with this figure staying quite steady with 76 logged last year compared with 74 in 2020.

The second most active country was the United Kingdom with 13 stations logged, up one from 2020.

Some of the stations were only on air once or twice while others made regular appearances on the free radio bands throughout the year.

One of the most frequent, Charleston Radio International went off air last month with transmitter problems but hopes to be back in the next few months, while another, Laser Hot Hits, has been missing from shortwave for much of the year, although is still continuing online, while Merlin was raided in September and has been off air since but he is also streaming online.

And in November the free radio world mourned the loss of German free radio operator Werner, known as Dr Tim. He broadcast under many different names, as well as his own. Last year I logged 23 of his stations, plus his broadcasts as Radio Dr Tim.

Some other stations also like to use different names like Johnny Tobacco (Triple L, Abu Dhabi, Black Bandit) and Ronalisa (Ronnie AM, Radio Tesla).

In 2021 I heard shortwave pirates scattered across 15 European countries.

The shortwave free radio scene still seems quite healthy, although many of these stations consist of just music and jingles without anyone behind the mic.

The Shortwave Free Radio Memories blog was unhappy about this situation in a recent post: https://ukshortwavefreeradiomemories.blogspot.com/2021/12/enjoy-silence.html

The Dutch medium wave pirate scene continues to thrive with two 2021 round-ups done by the MW Free Radio blog in England and the MG Piraten blog, with both DXers logging more than 200 Dutch pirates during the past 12 months.
https://mwfreeradio.blogspot.com/2022/01/the-class-of-2021.html
https://mgpiraten.blogspot.com/2021/12/middengolf-piraten-ontvangen-in-2021-z.html
Posted by uk dxer at 12:00