Remembering the UK shortwave pirates of the 1990s 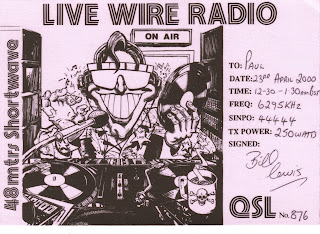 You might have noticed a link to a new blog called UK Free Radio Shortwave Memories from the
1990s.

In it the author, who calls himself the 1990s Free Radio Listener, sets out his experiences of tuning around and hearing some of the British SW pirates who used to grace the airwaves during that decade.

In his opening post he writes: "My blog will therefore not serve as a history of UK free radio on shortwave during the 1990's, but my experiences of it. I am not seeking to simply detail an A-Z of what the UK scene consisted of from 1990 to the turn of the millennium, but to chronicle what I heard, enjoyed, and greatly miss to this day. There is no other brief or guideline as to how this blog will take shape, but it promises to be for me a fascinating meander down memory lane, and one that I hope you will find interesting and enjoyable, too."

These are chunky posts you can sit down and read with a cup of tea as he recounts his memories of this time. He has already cast his eye over stations such as Live Wire Radio, Weekend Music Radio, Station Sierra Sierra and taken a look at who is still around in the 21st Century.

He welcomes comments and your memories on his blog which can be found at: https://ukshortwavefreeradiomemories.blogspot.com/

Thanks Paul, I appreciate this. Memories, anecdotes, and suggestions always welcome!